When you search the word “Entrepreneur” on YouTube, there’s a good chance the top result will be the music video for Pharrell Williams & Jay-Z’s song with the same name.

While Black musicians like Pharrell and Jay-Z are innovating sound year after year, many are starting their own ventures outside of music as well. Building communities with both their music and their businesses, these artists have identified opportunity in their influence through innovation and entrepreneurship.

If you don’t know Pharrell Williams (aka Skateboard P) by his name, there’s a good chance you’d recognize his voice in his 11x platinum hit song, Happy. But Pharrell is much more than just Happy, he’s a multi-talented singer, rapper, producer, designer and serial entrepreneur. After signing his first deal in the early 90s after a high school talent show, Pharrell began his journey with innovation. In 2003, it was estimated that 43% of all songs on the radio were produced by The Neptunes, the first of many collaboration projects Pharrell worked on. Fast forward to today, and the creative has won 10 Grammy Awards along with endless other honors and recognitions.

With his music career booming, Pharrell took a stab at clothing for his first venture outside of music. In 2005, the artist launched two high-end streetwear brands Billionaire Boys Club and Ice Cream. Today, these companies generate a combined $25 million in annual sales. His success in fashion led to more collaboration with the likes of Adidas, Moncler, Uniqlo, and Louis Vuitton. Now, as an established entrepreneur and musician, Pharrell has decided to channel his innovation into something more meaningful and community driven, something he calls Black Ambition.

“When we have more ownership, we have more of a voice and more of the American pie,” says Pharrell in a recent Instagram caption. Founded just this past year, Black Ambition is Pharrell’s newest non-profit initiative that will provide a bridge to success for Black and Latinx entrepreneurs who are launching tech, design, healthcare, and consumer products/services start-ups.

In 2021, Black Ambition will be running two national competitions that will culminate in July. The Black Ambition HBCU Prize will award up to a $250,000 grand prize for the top team, and award smaller prizes to at least 9 others. All teams must have an HBCU-affiliated individual that identifies as Black/African/African American and/or Hispanic/Latino/a/Latinx. The second competition, simply titled The Black Ambition Prize, is open to any venture with a founder that identifies as Black/African/African American and/or Hispanic/Latino/a/Latinx, and will be awarding a grand prize of up to $1,000,000.

While the prize money is sure to benefit the winning teams, Pharrell’s long term vision for Black Ambition is to normalize inclusive entrepreneurship. In his own words, Pharrell hopes to, “see a future where ideas flourish, ruinous risk is diminished, and Black and Latinx entrepreneurs are positioned to realize America’s promise.” And Pharrell’s community building efforts go beyond just the startup community. YELLOW, Pharrell’s education-focused nonprofit, puts youth at the center, empowering children from diverse backgrounds to realize their potential. Co-hosting education events with Amazon, providing resources to teachers, and working with students to promote entrepreneurship are just some of YELLOW’s initiatives.

Even with his lengthy list of accomplishments already under his belt, Pharrell isn’t stopping any time soon. At 47, the creative is finding new ways to spread happiness year after year, through both sound and innovation. But Pharrell isn’t the only musician with a knack for entrepreneurship.

Some of the biggest names in business started as musicians. Andre Romelle Young (aka Dr. Dre) first made waves in the music industry back in 1987 after founding supergroup NWA and releasing his own Grammy-winning album, The Chronic, in 1992. Today, Dr. Dre has a net worth estimated to be $800 million with the success of his record label, Aftermath Entertainment, and his consumer audio company, Beats Electronics. 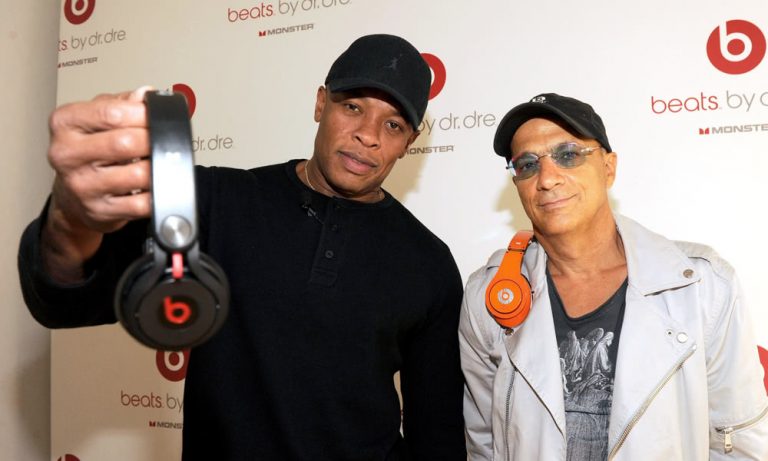 As a musician himself, Dre wanted to create a company so people could listen to non-pirated music with quality speakers. Focusing on pop and hip-hop music, Beats products tended to be more bass-heavy than other speakers, providing customers with a unique listening experience. At the same time, Dr. Dre used his influence to promote the product among other popular musicians using endorsements, product placements, and co-branded products. Harmonizing his product with both the sound and the artist, Dr. Dre created a brand that encouraged consumers to support artists by purchasing their music instead of pirating. And this concept proved to be a success after Beats Electronics was acquired by Apple in 2014 for $3 billion, making it the largest acquisition in Apple’s history.

Jay-Z, one of the most successful musicians of all time, acquired Norwegian-based streaming-service company Aspiro in 2014 to found Tidal. Tidal pays out more than double per stream compared to major competitors like Spotify and Amazon Prime, and provides listeners with lossless CD quality audio. While Tidal still makes up less than 1% of the music streaming market, his goal is the same as Dre’s, to bring more money back to musicians by using their established influence.

Rihanna’s successful makeup brand, Fenty Beauty, was her own response to seeing a void in the industry for products that performed across all skin types and tones. Forbes reported the company made more than $570 million in sales during 2018. Tyler, the Creator (who is featured in the Entrepreneur music video) launched his own music festival that doubles as an annual carnival, founded multiple clothing companies, and produced a handful of culture-shaping TV shows. Chicago based nonprofit, SocialWorks, was launched by Chance the Rapper to empower youth through programming focused on education, mental health, homelessness, performing, and literary arts.

And while all of these artists continue to build their businesses, they still manage to find time to innovate the sound we hear on the radio everyday. Make sure to check out Pharrell’s entire Entrepreneur music video, as it features a wide array of startups and businesses founded by Black entrepreneurs across the globe!