For Amanda Morrison, civic duty has always been a part of life.

“I’ve always been someone who wanted to serve communities, and maybe even run for office some day,” says Morrison. And for anyone who knows her family, this comes as no surprise. Morrison’s mom has long served for the city government in their hometown of Springfield, Missouri, and almost all of her other family members are current or former teachers in Missouri or Arkansas.

Public service is ingrained in the DNA of this young entrepreneur. But as she began exploring opportunities to serve her community and her home state, she quickly uncovered a major problem: there were only a few women in leadership positions across the state she could look to for guidance and inspiration. So, during her Sophomore year at Temple University, Morrison decided to do something about it, launching Missouri M.A.D.E. – a nonprofit, non-partisan organization on a mission to identify, recruit, and train women from across Missouri to run for public office at local, state, and federal levels.

Now, as part of the Fall 2020 cohort of the Blackstone LaunchPad Fellowship – a virtual entrepreneurship program run in partnership between the Blackstone Charitable Foundation, Techstars, and Future Founders – Morrison is developing the skills and resources needed to scale Missouri M.A.D.E. to the next level, and create a future where our country’s leaders and civil servants represent the diverse range of citizens they serve.

From Chocolate to Congress

Morrison’s journey to running a social impact nonprofit has some sweet roots…chocolate!

While in high school, Morrison was selected as one of 15 students to participate in Chocolate University, a program run by local chocolatier Askinosie Chocolate. Taking place every two years, Chocolate University brings students on a trip to visit farmers from one of the origin countries where Askinosie sources its cacao.

On her 2016 visit to Tanzania, Morrison met with local farmers, and watched first hand as the company’s founder Shawn Askinosie – a defense attorney turned social chocolatier – worked diligently to create a fair and equitable supply chain for their business. It was her first real glimpse at the power of entrepreneurship, and its ability to create change for good. As Morrison puts it,

“One thing that I have really come to believe for entrepreneurs in general is that it’s not meaningful work if there’s not a social impact aspect to it. And I think for some organizations, how they approach social impact  looks differently than others. But work is most meaningful for yourself and for the community whenever social impact is involved.”

That sweet summer spent at Chocolate University further cemented Morrison’s desire to serve her community and the state of Missouri through social change, and the following year she leveraged this experience to land an internship with one of the most powerful and impactful public servants around: United States Senator Claire McCaskill.

Lessons from the Senator

Claire McCaskill was the first female Missouri Senator elected to the United States Senate. As her intern, Morrison spent the summer working directly with constituents, answering phone calls, and learning about Missouri politics. 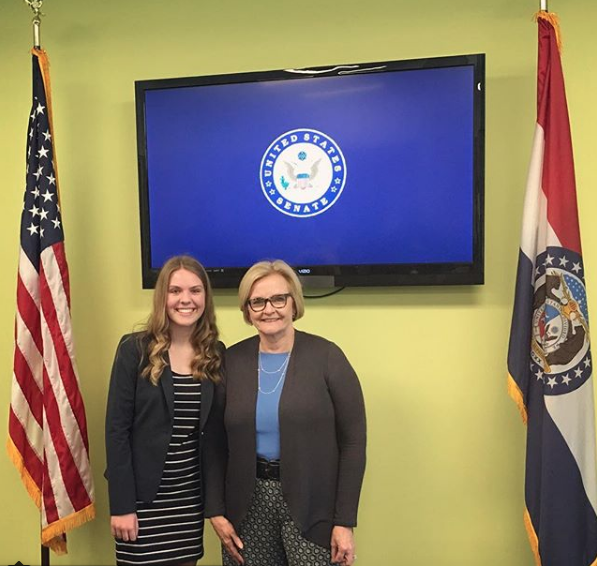 Going into the internship, she knew there was a lot of sexism directed at McCaskill and her politics, however it wasn’t until she served as a first point of contact in her office that Morrison fully realized the full scope of stigmas towards women in office, and how the public reacted to their decisions. Coupled with the fact that the year was 2017, yet McCaskill was just the first elected female senator in Missouri, and Morrison couldn’t not stop thinking about the challenges facing women in politics.

It was a desire to overcome these challenges that prompted her to apply for the Mount Vernon Leadership Fellowship. As part of the application, students are required to submit a proposal for a project they’d like to implement in their home community or college campus. At the time, Morrison was at Temple University in Philadelphia, and so she decided to propose a one-day summit for college aged women who want to run for political office in the city. 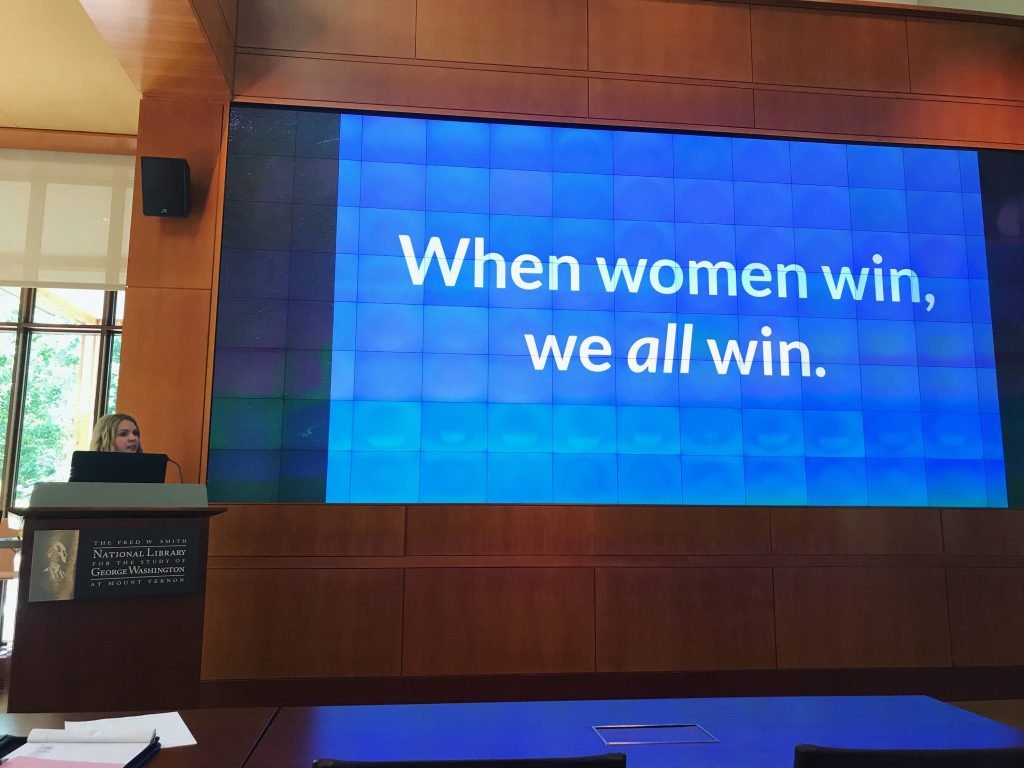 While Morrison’s proposal landed her a spot in the Fellowship, once she began reaching out to leaders in Philadelphia she realized there wasn’t a lot of impetus for a summit to take place in the city. As she quickly learned, the resources available for female leaders in major urban areas were significant compared to the ones she had seen in her home state of Missouri while working for Senator McCaskill.

Unsure of what to do, a friend asked Morrison if she had ever thought of transitioning her idea to Missouri. And with that, everything clicked. Instead of a one-day event in a large urban center, Morrison realized she should focus on creating an infrastructure that could create long-term progress in more rural areas. Missouri M.A.D.E. was born.

Returning home, Morrison made quick inroads establishing her organization as the go-to resource for female and marginalized community leaders.

The M.A.D.E. in Missouri M.A.D.E. stands for Mobilizing And Diversifying Elections. They pursue their mission through two core areas of work. The first is inspiring women to get involved in politics and civic engagement, which they accomplish by having elected officials and community leaders host events (both in-person and virtual) to get women thinking about running for public office or representing their communities in public facing roles. And the second is empowering these women with the tools, resources, and access to mentorship they need to pursue public office, which is done through empowerment events and identity specific training, including programs focused on the LGBTQ community as well as Black Lives Matter activism.

But Missouri M.A.D.E. is not just for those seeking to run for office. More recently, the organization has expanded its focus to several other key areas, including diversity in office staffing (as Morrison explains, a female politician whose office is filled with straight white males is not doing much to expand diversity and inclusion in the state), as well as connecting with the general population in Missouri, and educating them on the efficacy of women leaders, and why having more women in office is important.

To expand its reach, the organization hosted its first-ever leadership summit in July 2020. Rather than making it exclusively for women who are interested in running for public office, they eliminated any requirements for attendance, and encouraged all genders, all races, and all geographic locations to attend. In the end, this open call created a much more diverse pool of attendees, including a good portion that had no interest in running for office, but still wanted to learn about the landscape of women’s leadership in Missouri.

The Future is Female

After graduating from Temple in May, Morrison has spent the last six months working on Missouri M.A.D.E. full time. To help accelerate the growth of her organization, she’s relied heavily on Blackstone LaunchPad and its Campus Director at Temple, Julie Stapleton Carroll.

In fact, it was Stapleton Carroll’s encouragement that led Morrison to apply for the Fall 2020 cohort of the Blackstone LaunchPad Fellowship, which offers young entrepreneurs with a $5,000 grant and 8 weeks of entrepreneurial resources, mentoring, and support.

For Morrison, connecting with a group of socially-conscious, like-minded entrepreneurs has enabled her to fuel her organization’s growth. And this growth couldn’t have come at a better time, as this fall’s election left Missouri without any female representation on the statewide level, and just two females out of the combined 10 elected Representatives and Senators serving the state on the national level.

As Morrison and Missouri M.A.D.E. work to increase the representation of women across public office in Missouri, they also have an eye on neighboring states as well. Because while Missouri will always be home, Morrison recognizes that many Midwest states need help with encouraging and empowering female leaders.

The Power of Public Office

From her early days looking up to her mom as a leader in local government, to her time spent with Missouri’s first female Senator, Amanda Morrison has had a single question on her mind: how do we elect leaders that best represent our interests as a society?

If our recent election has shown us anything, it’s that this is not an easy question to answer. But with passionate young founders like Morrison and her organization Missouri M.A.D.E., we can rest easy knowing that there is an entire generation of entrepreneurs ready to tackle social challenges like these head on, and create a better future for all.

To learn more about Missouri M.A.D.E., be sure to visit their website, and check out Morrison’s latest coverage in The Missouri Times: