Females First: How Whitney Wolfe Herd Became a Billionaire by Empowering Women With The First Move on Bumble | Future Founders

Females First: How Whitney Wolfe Herd Became a Billionaire by Empowering Women With The First Move on Bumble

By putting women in a position of power through her dating app, Bumble, Whitney Wolfe Herd has broken barriers by becoming the youngest self-made female billionaire founder.

In a saturated dating app market, Bumble has been able to establish itself as a leader by providing users with a unique matchmaking experience. Reportedly responsible for coming up with the name Tinder herself as their VP of Marketing, Wolfe Herd founded Bumble in 2014 after leaving Tinder due to disagreements among fellow executives. Wanting to create a dating app that empowered women to make the first move and feel safe in doing so, Wolfe Herd now has had a hand in creating two of the most popular dating apps available to users worldwide.

With shares of Bumble soaring from $43 to $76 on the day of its IPO, Wolfe Herd’s 12% stake in the company now puts her net worth at an estimated $1.6 billion, making her the youngest woman ever to reach the 10 digit milestone. For Wolfe Herd, she attributes this success to the, “1.7 billion first moves made by brave women on our app.”

At 31, Wolfe Herd’s journey to becoming the youngest female billionaire founder was somewhat like a rocky relationship. Across the dating app landscape, many executives have a history with one another, Wolfe Herd included. Joining the Tinder team in 2012 as a field marketer, Wolfe Herd made a name for herself (and the app) and quickly became the VP of Marketing. While her status as a co-founder was often debated by other executives, it’s clear that her marketing efforts were effective, with the app reaching 12 million matches a day by the end of 2014. 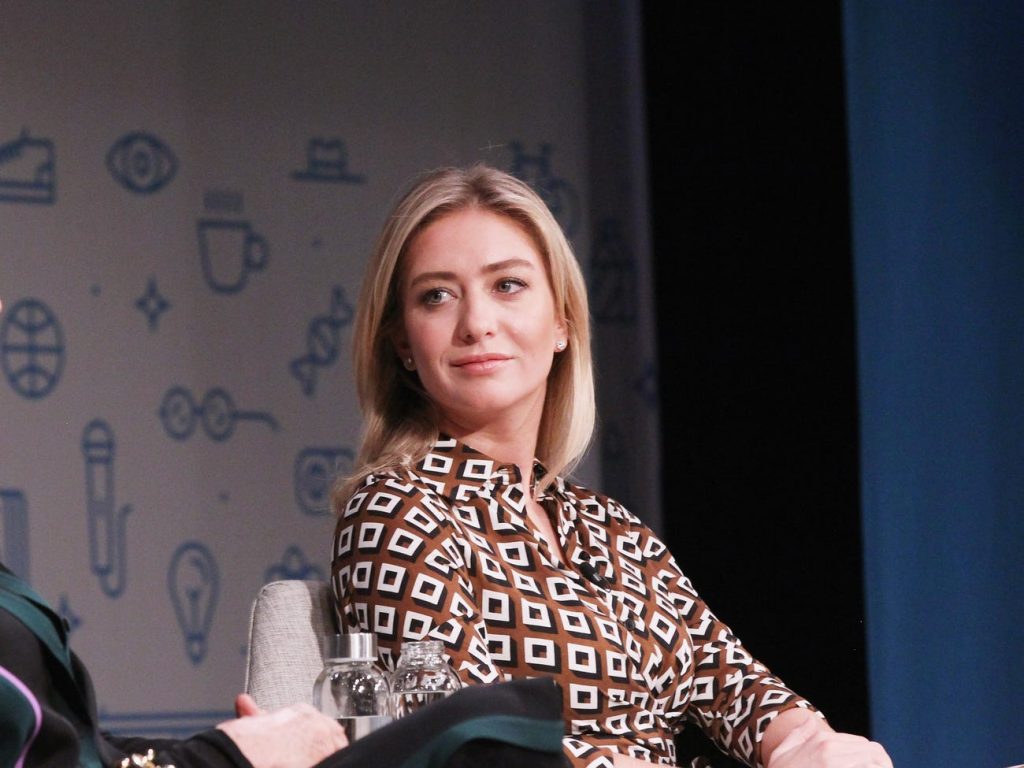 While Tinder began sparking relationships for users across the country, Wolfe Herd also began dating Tinder CMO, Justin Mateen. In 2014, she left Tinder and sued the company for sexual harassment, claiming Mateen had sent her threatening and derogatory text messages. Wanting to get away from a toxic and unjust environment, Wolfe Herd was ready to move away from the dating app scene. But soon, a conversation with Badoo (the leading European dating app at the time) founder Andrey Andreev sparked a new idea and brought her back into the game.

Andreev, impressed by Wolfe Herd’s marketing achievements at Tinder, originally hoped to bring her onto the Badoo team as their new CMO. Set on being her own boss, Wolfe Herd denied the offer but agreed to meet with Andreev to talk about her next venture. Wanting to work on some type of women-centric social brand, Wolfe Herd’s idea from Bumble came from a specific scenario she had always imagined in her head working at Tinder. “I always wanted to have a scenario where the guy didn’t have my number but I had his,” said Wolfe Herd in an interview with Forbes Magazine. She recalled telling Andreev. “What if women make the first move, send the first message?”

This conversation led to Wolfe Herd getting back into the dating scene and founding Bumble, her own dating app that was made for women, by women.

Power to the Gals

While Tinder’s name came from sparking up a conversation with a match, the name Bumble is rooted in the buzz of a new relationship. Using her marketing mind, Wolfe Herd also saw potential of a strong brand image by integrating the details of bees and hives into the app. Today, Bumble offers more services than just dating, but their original product still remains true to Wolfe Herd’s concept. “Bumble Date” levels the playing field and changes the dynamics of (heterosexual) dating by only letting the woman send a message within 24 hours of matching with a man. By giving messaging power to women, they are more protected from situations like the one Wolfe Herd went through with her fellow Tinder executive.

Wolfe Herd recognized the opportunity from her own experience, and surely enough, many women empathized with her and decided to give Bumble a try. Happy with the product, many female users indicated that they were looking for more than just love, they also wanted to meet potential friends or career partners. This realization led to the creation of “Bumble BFF” and “Bumble Bizz”, two alternative networks users can choose to matchmake in. Even in the business setting, women still make the first move to combat the history of sexism that happens in the office. 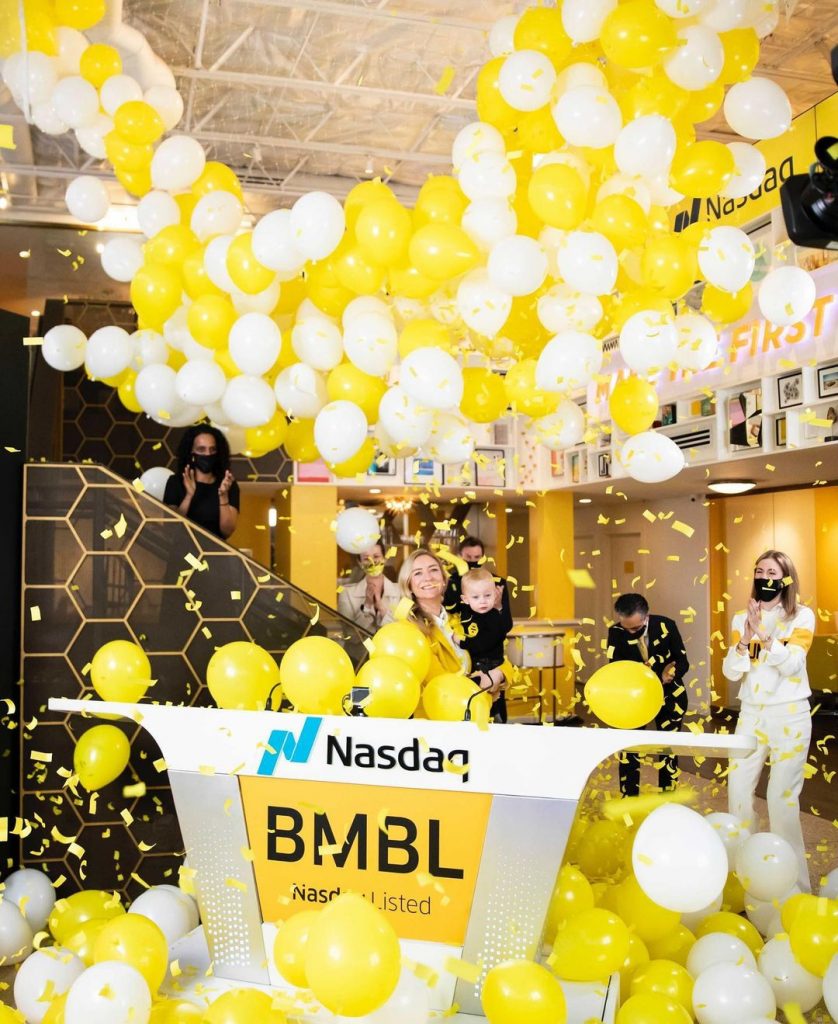 Bumble celebrating their IPO in their new Austin, TX HQ coined “The Hive”

In Bumble’s office, the power of women is apparent. Including top executive roles, 85% of the Bumble staff are female. In 2019, Wolfe Herd implemented new parental benefits for Bumble employees after announcing she was pregnant with her first child. Clearly passionate about empowering women, Wolfe Herd’s recent success only further proved that her vision is shared among women worldwide. Even Tinder’s current parent company, Match Group, tried to buy Wolfe Herd’s company in 2017 for $450 million. Today, that offer doesn’t even come close to matching Bumble’s worth after its IPO on Wednesday, February 10th.

By midday Thursday, the opening $43 shares had risen to $76, valuing the company close to $8 billion. $2.2 billion was raised from investors as it went public via Nasdaq, ironically, just in time for Valentine’s Day. Reaching 100 million users, earning yearly revenues above $250 million, and becoming the parent company to Badoo are just some of the other recent milestones for Wolfe Herd’s dating platform. While Match Group still leads the market, competition between the major dating apps barely depletes revenues, since many lovebirds are active (especially in quarantine) on multiple apps.

And despite her record breaking new 10 digit net worth as a result of Bumble’s IPO, Wolfe Herd told Fortune Magazine that she is most excited to “have this record be broken soon; we are very excited to cheer on the next woman who beats this record.” Empowering women is how Bumble found success, and now she’s ready to help more women do the same.