We’ve all felt lost at some point in our lives. Like many others, Brittany Harris felt the most lost during her time in college. She switched degrees, schools, and even states, but it wasn’t until she discovered her creative side through fashion that she finally felt at home.

One thing Brittany discovered during fashion school was her skill in digital illustration, something that she admits she didn’t think too much about at the time. But that skill turned out to be exactly what Brittany needed to discover her true self, and one that has led to running her own business, and contracts with Tampax, NPR, L’Oreal, Adidas, and most recently, Disney.

This is a story of how Brittany Harris used a college hobby to become one of the top digital illustrators in the nation.

The journey for Brittany began when she discovered an Instagram account @solacilike. Up to this point, Brittany didn’t know you could make money with digital illustrations…bringing to mind the old saying “you can’t be what you can’t see”.

The entrepreneur within Brittany decided to launch her own Minimum Viable Product (MVP) to test the market and see if she had what it took to be a digital artist. Her creative niche was to illustrate the Black Diaspora, but with a call to action. She produced a series of designs for Black History Month to test the waters, and used the amount of likes she got as validation. Her first piece, “Afro Girl,” got double the amount of likes she would typically get on her page and her most liked post of the series, “Level Up,” got eight times as much. This was enough validation Brittany needed to pursue this dream, but the success didn’t stop there. 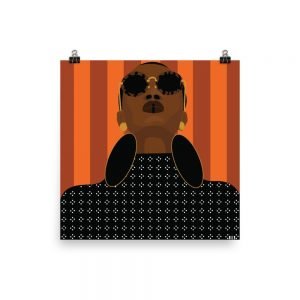 Shortly after, Brittany was contacted by a representative of Australian singer-songwriter Courtney Barnett to produce concert posters for her upcoming Taste of Chicago performance, and made her first sale just one month after publishing her illustrations. The art caught the attention of Future Founders’s Director of Startups, Tina Hrabak, who is a fan of the musical artist. They connected, and Brittany was invited to participate in our Startup Bootcamp (then called the Residency).

Brittany expressed that her time in the Bootcamp made her realize that if she didn’t know something, Future Founders was able to connect her with people who did. She felt that she got personal support from staff members like Tina Hrabak and even our CEO Scott Issen. “Everyone was really responsive and genuinely invested in my success,” she says. “Even two years later, I found that the further I get into my business, the more Future Founders is able to help me.”

The most interesting part of Brittany’s work is that she has not had to reach out for any clients. Everyone finds her through Instagram, @gobeeharris. Mizani, a L’Oreal brand, reached out to her a couple months after the Courtney Barnett contract. Most recently, Hue Unlimited, a Black-owned marketing agency, reached out to her to collaborate with a well known entertainment company, Disney. She got to work with three other artists from Chicago to develop promotional art for the Pixar movie Soul. One day, somebody randomly tagged her on an Instagram post. When she checked the post, she saw a mural of her work in Orlando’s Disney World! Apparently, Disney was showcasing her work for both Black History Month and Women’s History Month in their parks.

Brittany remembers a time when she would cold DM other artists in the space asking for advice, only to get shot down. This made her feel defeated. Now, when she talks about the success she’s had, she gives a lot of credit to the supportive community she built over time with other projects. She advises founders to focus on building their own success and validation through an organic community. “Focus on building on organic following. Word of mouth is still the best marketing,” she says. For the founders who use social media heavily for their business, Brittany emphasizes using the right hashtags, and to not shy away from putting them in your caption.

Looking back, it’s crazy to think that all of this started with feeling lost in her undergraduate journey. Despite this, she had an idea, tested the waters with a no-cost MVP, and got the validation and first sale she needed to get started. After the Disney deal, Brittany has her sights on hiring a new artist to take on the small and mid-sized projects that come her way. She’s also looking for ways to pay it forward and mentor the next generation of leaders.

Check out her Instagram, @gobeeharris, and her shop, Bee Harris. To learn more about the support she got through Future Founders, check out our Startup Bootcamp, a free, idea-stage accelerator for the nation’s next generation of entrepreneurs.