In 2015, Koby Lomax, then a freshman at Landstown High School in Virginia Beach, VA, shared a dream with his parents: “Mom and Dad, I want to start a candle business.” Fast forward almost 7 years later, and Lomax is the founder of Ardent Candle, a booming scented candle company that is selling out month after month with the help of his viral social media strategy.

With a growing fanbase of 250,000+ followers on TikTok, Lomax’s company has seen tremendous growth in the past couple months. Following in his parent’s footsteps as entrepreneurs, Lomax always knew he wanted to be his own boss. Researching the science behind fragrance and eventually teaching himself how to make candles, Lomax quickly began generating  buzz with his company as a Freshman at Old Dominion University. But as Lomax started getting involved in a handful of clubs on campus, he had to start limiting his time to focus on the candles.

“In 2019 I was doing everything, but not really getting anywhere with it. I involved myself in a bunch of stuff to feel like I was doing something. I got frustrated and decided to pick a couple things and cut everything else off,” said Lomax, reflecting on his college career. His schoolwork, his YouTube Channel, and the candle company became his trifecta of focus. Joining the Future Founders Startup Bootcamp in 2020, combined with a school year cut short due to the COVID-19 pandemic, gave Lomax time to regroup and really hone his brand.

This focus led to Lomax selling out his entire inventory in February after going viral on TikTok. But unlike other viral content that disappears a week later, Lomax and his candles have continued to sell out every new product launch since, making inventory the biggest challenge for the young founder.

Now, you’re probably asking yourself, “What’s so special about Lomax’s candles that they would go viral?” Well, his secret recipe for success includes a spoon, a Pyrex bowl, and the wonderful scent of breakfast cereals.

Scents that Fill the Room

Even in a saturated candle market, Lomax was able to identify multiple areas to be both creative and innovative. Focusing first on the wax, Lomax sought to create a candle with a scent that fills an entire room. Learning how to make candles from the comfort from his own home, he soon developed a clean burning soy based wax blend. Not only do the candles burn for over 50 hours and fill an entire room with their unique scents, they are also paraben free, phthalate free, sulfate free, cruelty-free, AND vegan.

“The Science” behind Ardent Candle

With quality already baked into every product, Lomax also found a way into people’s hearts by creating a unique line of cereal-scented candles that come in a reusable Pyrex bowl with a metal spoon. Using his same unique wax blend, he found a way to mimic the scent of cereals while simultaneously encouraging his customers to be eco-friendly and reuse their bowl and spoon after the candle is burnt out. A sheer passion for being creative led Lomax to creating this line of his candles, and that passion later turned into the main driver of his recent success. But before he dove into selling, Lomax took some time during 2020 to hone his business and marketing strategy.

A Year of Preparation

Creating candles that serve the wants and needs of his customers became Lomax’s core focus throughout 2020. Taking what he learned in the Future Founders Startup Bootcamp that year, he knew he had a solid product and that with the right business strategy, growth was on its way. Reflecting on the Bootcamp, Lomax identifies lessons learned from his cohort’s book club as some of the most memorable takeaways. “Being able to have an open dialogue while reading was so valuable,” claimed Lomax. Not only was he gaining lessons from the books themselves (he highlighted Simple Numbers, Straight Talk, Big Profits! by Greg Crabtree), but he was gaining insights and strategies from his fellow Bootcampers as well. 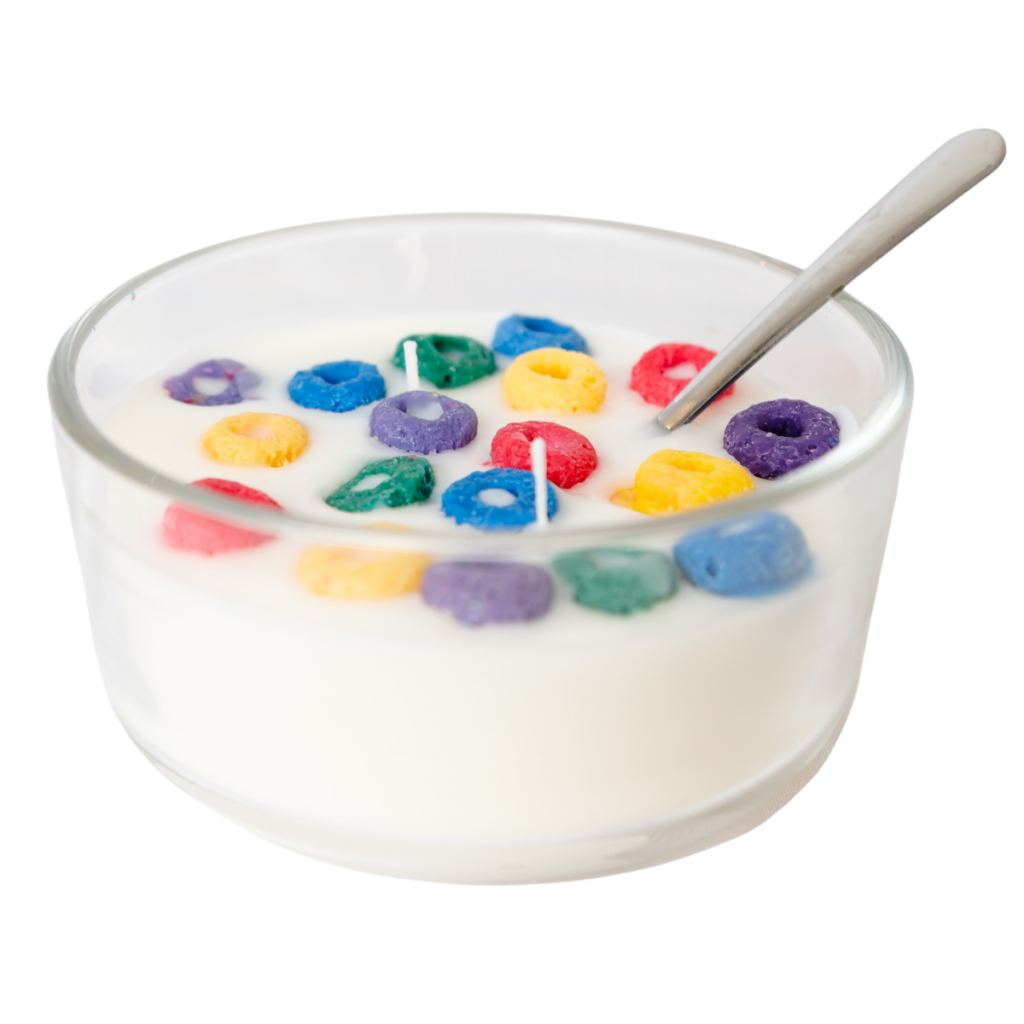 During Startup Bootcamp, Lomax also utilized the open communication available to him with the Future Founders team. He remembers talking to Scott Issen, President & CEO of Future Founders, about hard decisions he had to make that ultimately would benefit his bottom line. Constant communication with the other founders and his mentors helped him put his money in all the right places to ensure 2021 would be his year. “Ever since the end of last year, I kept telling myself – something’s gonna pop off,” said Lomax, “Everytime I would walk my dog I would say it to myself over and over again.”

With a background as a YouTuber and creating content for his personal brand, Lomax jumped on TikTok. Seeing fellow TikTok creator and entrepreneur Liv (@ceo.liv) amass over 1.7 million followers for her jewelry business on the app, Lomax knew there was potential for Ardent Candle. For $50, he took Liv’s online class that provides strategies for selling products via TikTok and Instagram. “It was the best 50 bucks I ever spent,” exclaimed Lomax, “I went straight to the marketing module and tried it.” Creating content that followed the guidelines of the course, Lomax started posting videos on Ardent Candle’s TikTok. And the rest is history.

“I had 18 followers on TikTok,” said Lomax. This was on Monday, January 25, 2021. The next morning he had gained 150 followers and $200 in sales, and ended up with $3,000 in sales by the end of that Tuesday. Two days later, he was already closing in on matching his entire 2020 gross sales. The viral success proved to be both exciting and challenging for the young founder. While he was gaining followers and making sales, he had to figure out how to adjust his inventory and production. Again, mentorship helped him move forward confidently.

With guidance from his mentor Steve at his local co-working office space, Lomax committed to making candles in larger quantities and listing them up on his website for pre-sale. “You have this momentum right now,” quoted Lomax from a conversation he remembered having with Steve before things really took off. Soon after, one video of a behind-the-scenes look at how he makes his signature cereal candles (now with 3+ million views) skyrocketed his following, and led to Lomax selling $15,000 worth of candles in just one day. 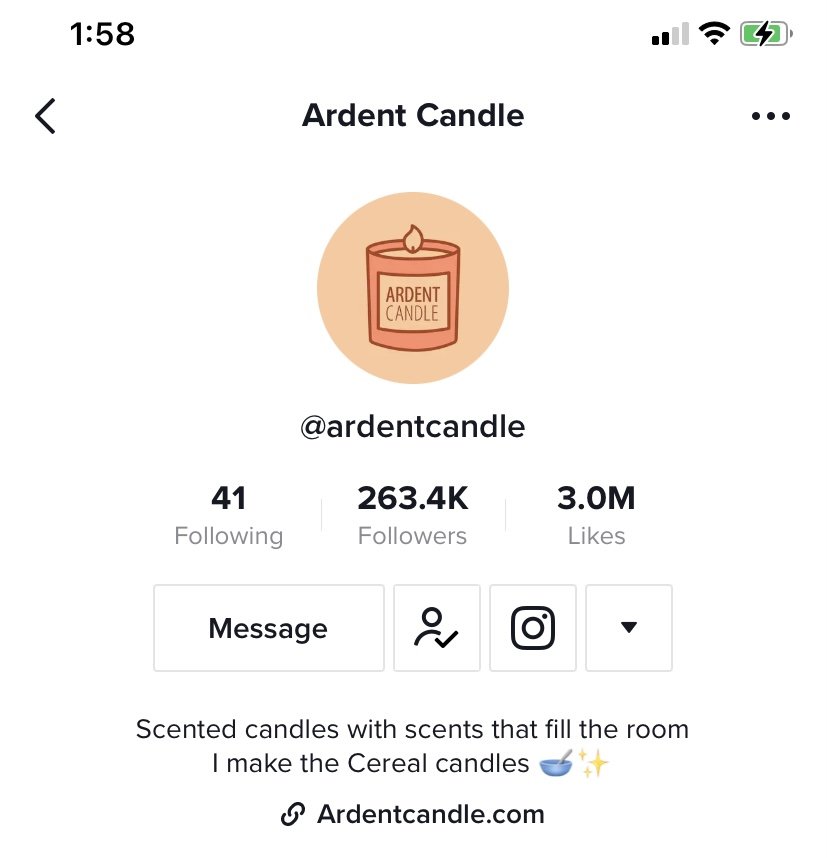 Oftentimes, viral content can be controversial, but for Lomax, his virality was founded in his transparency. Many of his most popular videos are direct responses to questions he received from customers about how he makes his candles, challenges he faces with keeping up production, and general questions about his entrepreneurial journey. Simultaneously building a loyal fanbase after going viral, he was able to continue sales throughout the month of February and March. Every new cereal candle release since has sold-out as well, and both the Ardent Candle TikTok and Instagram accounts have seen steady growth.

A Candlelit Summer Ahead

For Lomax, the future smells good. With a long list of candle releases already planned throughout the year, he’s most excited to take a step back from production and focus his energy more on the marketing. With a new warehouse and the ability to bring on part-time candle makers, Lomax hopes to build his brand with new partnerships and continue being the face of Ardent Candle. “Shooting campaigns and being on set, that’s the most fun thing ever. I’m so excited for Friday,” said Lomax, referring to the photoshoot for his new Lucky Charms “Shamrock Surprise” Candle (which sold out just 3 days after launching on Friday, March 1st).

Lomax’s other focus as a founder is to continue innovating and developing new product lines. In the future, he sees Ardent Candle securing licensing deals with companies beyond just cereal, automating the candle production process, and continuing as the “anomaly” of the candle market. “There’s not much innovation in candles. There’s hasn’t been for hundreds of years. Growing up with social media, I’ve seen people shakeup industries in new ways and I want to do that with candles,” says Lomax.

When asked if he plans on moving away from candles any time soon, Lomax claims, “I want to do this.” Luckily for us, there’s a long list of new cereal scented candles coming down the pipeline throughout this summer and beyond. We at Future Founders are so excited to see what scents Ardent Candle fills the room with next.

Check out the Ardent Candle Website and sign up for email notifications before the next new candle sells out!