Dieumerci Christel (who goes by “Chris”) wants to do more than just offer a new tool for educators. He wants to work alongside teachers to change the narrative of education and how we teach kids.

“With the background I come from, it’s very unbelievable for me,” says Chris, speaking on his recent acceptance into the Techstars Austin Class of 2021. Chris is the founder of Enlight App, a platform that helps teachers become experts on their students by allowing students to share their uniqueness through self-created student profiles.

Techstars had been on Chris’ radar ever since he first learned about them during his freshman year at North Dakota State University. After four years of passion and hard work, he decided it was time to apply for the prestigious program. Pairing together his time in the Future Founders Fellowship with a great product, Chris found himself more confident in Enlight than ever before, telling us, “I think it deserves it, especially this year.”

What makes Enlight so special and deserving of its spot in Techstars Austin is Chris’ story as a young entrepreneur dedicated to collaborating directly with his target audience, teachers.

In Andrew Jason’s article published on Fargo Inc!, The Oral History of Dieumerci Christel’s Short Life, one can learn about Chris’ childhood growing up in a refugee camp in Tanzania until he was 13. There, he developed problem solving skills that have served him well when he moved to America. “A problem is going to bother me until I fix it,” said Chris, referring to the boredom he and other students felt going through the American education system. Feeling unattached to his teachers and bored by his classes, Chris went online to find a solution. 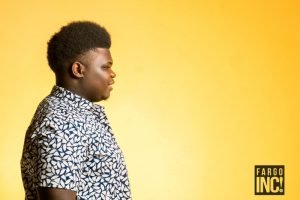 With the help of Reddit and Facebook teacher groups, Chris found his answer. Talking to teachers, he noticed their burning desire to impact their students, but class sizes and class loads make it hard for them to know every kid in the classroom “You can’t just mentor someone if you don’t know who they are as a person,” said Chris. His obsession with problem solving and talking to teachers led him to his ‘epiphany moment’ – optimizing different pre-existing education platforms to survey students for teacher feedback, allowing the student to learn from the teacher and the teacher to learn from their students.

This epiphany moment resulted in Chris founding Enlight in January of 2018, turning his idea into a platform to help teachers become more engaged and familiar with their students.

For Chris, he first looked to exhaust all grassroots opportunities in his hometown to not only make sure his platform was solid, but to also build his network locally. After researching local grants, founding an entrepreneurship club at his school, and talking with the people closest to him, Chris finally felt he had an MVP (minimum viable product) that he could pitch with promise. Over the years, Chris has been able to evolve his platform through participating in multiple accelerator programs, including the likes of Wefunder Workway, the Future Founders Fellowship, and now the 2021 Techstars Austin Accelerator. 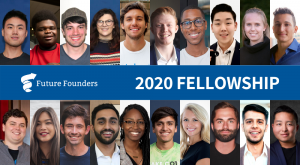 Chris with the 2020 cohort of the Future Founders Fellowship

Fellowship and accelerator programs have been helpful for Chris by not only letting him learn, but assisting him in making the necessary connections to effectively build his company. He sees his time with the Future Founders Fellowship, a prestigious year-long program designed to accelerate the nation’s top young entrepreneurs and their businesses, as just one of many pillars for Enlight. That pillar being community.

“I don’t think I’ve ever built close friendships as fast as I did with Future Founders,” stated Chris, “I wouldn’t be here without them.” Having a support group of like-minded individuals who are all working towards their goals is important, especially as a young entrepreneur. Reflecting on his experience, Chris encourages first-time entrepreneurs to be intentional with the programs they choose to apply for. Different programs can teach you different skills, but by choosing the right one, Chris says “you can hone down what you actually need to get done.” In Chris’ case, his focus has been with his target market to create a product they will use.

Creating a True Board of Education

If there’s any theme you’ll find in Chris’ work with Enlight, it’s his commitment to letting teachers be the lead innovators of the platform.

“I am on a mission to close the gap between a teacher’s need to impact their students, and a student’s need to be engaged in their own learning.”

Instead of a board of business directors, Chris wants a board of teachers and a board of students. This is how he believes Enlight will revolutionize the way educators teach, by letting their experiences directly influence what the platform provides and how it operates. Enlight creates data-rich profiles of students and what they care about, so teachers can create learning experiences with enough flexibility for each student to feel welcomed, engaged, and productive. Transparency is key for any business with multiple stakeholders, and with Enlight’s entire platform being built around transparency, it’s clear the platform has potential.

Chris’ reason for applying to Techstars was to stop treating Enlight as a startup and more like a business. “Playtime is over,” he said ecstatically, “it’s time to really push the baton and take a chance.” The 3-month long accelerator program kicked-off on January 11th, providing 10 businesses with intensive mentoring, funding, and access to the Techstars network for life. The Austin cohort will be focusing on business fundamentals guided by the Levers framework, and will culminate into a virtual Demo Day and Investor Week in late March. 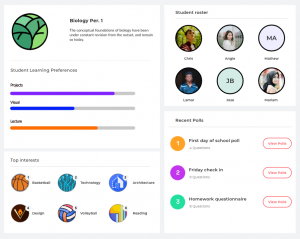 An example of a class profile taken from Enlight’s website

Planning to launch the Enlight Beta this February, this year is the perfect time for Chris to work alongside Techstars. Efficiency will be one of Chris’ main focuses for Enlight during the program, expecting growth both internally and externally. Without a co-founder or business partner, he sees Techstars as a second set of eyes for the business as he prepares to launch. And given Techstars Austin’s past success stories and Chris’ passion for his business, it’s a partnership destined for success.

But what Chris is looking forward to the most is to continue to pursue his mission – revolutionizing how we teach kids. “I really hope to attract exceptional people who are ready for change,” he stated. The ability to motivate change in education is a difficult task, but even as a full time student Chris has already built a community of educators invested in his platform. And now, as a Future Founders alumni and the newest Techstars Austin Class of 2021 founder, Chris is only just getting started.

Applications for the 2021 Future Founders Fellowship are now open.